Rabbi Riqi Kosovske became our rabbi, spiritual leader and educator twelve and a half years ago upon her ordination from Hebrew Union College-Jewish Institute of Religion in Los Angeles in 2007, moving with her partner and son to lead our congregation as its first full-time rabbi.

Rabbi Kosovske, or Rabbi Riqi as she is often called, brought to Beit Ahavah not only her extensive experience and knowledge as a leader, teacher, organizer, ritual creator, writer, artist and Jewish educator, but also great warmth, enthusiasm, passion for blending tradition and intense spirituality with her radically progressive consciousness.

Her creativity, expertise and commitment to Judaism, feminism, ecology, artistic and musical spiritual expression, transformational ritual, social justice, the Reform movement, Jewish Renewal, building a progressive Israel, interfaith connections, LGBTQ celebration, passionate community-building and exploring Jewish identity have led our congregation and the Jewish community around us forward.  We are blessed to have her. 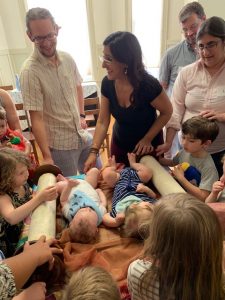 Rabbi Riqi spent six years formally studying towards rabbinic ordination at the Jerusalem and Los Angeles campuses of Hebrew Union College-Jewish Institute of Religion, and was a life long Jewish learner before that.  While in rabbinical school, she held a chaplaincy internship at UCLA hospital, and student pulpits in the Bay Area Shir Ami synagogue and UCLA and UC-Davis Hillels, led Lila Or teens and teaching at Santa Monica Synagogue, led B’nei Mitzvah students, and created a Jewish Renewal minyan at the Mishkan Tephilo Venice beach synagogue.  Prior to rabbinical school, Rabbi Riqi led services, belonged to and started progressive, feminist and Renewal minyanim, chavurot and worked in many synagogues in Berkeley’s East Bay area, Jerusalem and Cambridge-Somerville area, as well as throughout college and high school.

She also received Master of Arts and Master of Fine Arts degrees in Writing & Consciousness at San Francisco’s New College of California in 2000, and holds a B.A. from Brandeis University in English and American literature and concentration in Women’s Studies.  She grew up in Columbia, South Carolina, and spent time after college living and working in Cambridge, the San Francisco-Berkeley East Bay area, her beloved Jerusalem, and finally Los Angeles. 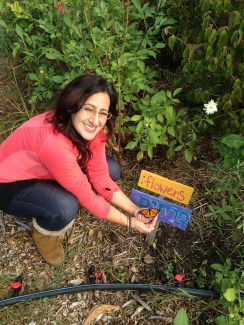 Today her passions have flourished including as a Mariposista, a backyard milkweed and monarch butterfly doula and passionate activist for the species.  Plant milkweed!